Former White House aide Omarosa Manigault Newman‘s new book has dominated headlines for days, and it has as much dirt on President Donald Trump’s personal relationships as it does his administration. In Unhinged: An Insider’s Account of the Trump White House, which came out Tuesday, Manigault Newman writes that Trump’s relationship with wife Melania is so strained that, “in [her] opinion,” the first lady is “counting every minute until he is out of office and she can divorce him.”

In the book, the 44-year-old former reality star writes that “Trumpworld intimates” often talked about the possibility that Trump had helped his wife, a former model, secure an Einstein (EB-1) visa. They questioned if Mrs. Trump had the “extraordinary ability” required to obtain such a visa and suggested that her husband used his wide network of connections to “secure or expedite it,” according to the book. Manigault Newman does not name any of these “Trumpworld intimates.”

In her book, Manigault Newman suggests that one of the reasons why Mrs. Trump stays in her marriage is for fear that Trump might find a way to “invalidate” the visa if she left him.

“Since Donald is fully aware of however she acquired her permanent citizenship, he could, if there were anything fishy around it, expose the methods and somehow invalidate it,” Manigault Newman writes. “He is a vindictive man, and I would not put anything past him.”

She continues, “If Melania were to try to pull the ultimate humiliation and leave him while he’s in office, he would find a way to punish her. This is a man who has said he could pardon himself from the Mueller investigation. Why not pardon himself over an alleged visa payoff?”

“In my opinion,” Manigault Newman adds, “Melania is counting every minute until he is out of office and she can divorce him.”

Immigration lawyers told The New York Times in March 2018 that Mrs. Trump probably did qualify for such a visa on her own.

Mrs. Trump’s communications director, Stephanie Grisham, said in a statement to PEOPLE on Wednesday, “Mrs. Trump rarely, if ever, interacted with Omarosa. It’s disappointing to her that she is lashing out and retaliating in such a self-serving way, especially after all the opportunities given to her by the President.”

In her book, Manigault Newman suggests that one of the reasons why Mrs. Trump stays in her marriage is for fear that Trump might find a way to “invalidate” the visa if she left him.

In Unhinged, Manigault Newman also writes that when Trump was at functions without his wife he “behaved like a dog off the leash.” She also addresses Trump’s alleged affairs with Stormy Daniels and Karen McDougal (which he has denied).

“It would be safe to assume that there were many others,” Manigault Newman writes, although she presents no proof of other relationships.

In the book, she paints Trump as a bully in his marriage. But she says she believes that Mrs. Trump is asserting her power in small ways. In Manigault Newman’s opinion, the first lady makes certain fashion statements (like wearing the “I really don’t care” jacket) to “punish” her husband.

Manigault Newman also says she suspects that Mrs. Trump intentionally embarrasses the president with “small gestures.” Multiple instances have been caught on film in which the first lady appears resistant to holding her husband’s hand. This happened in April 2018, as the first couple welcomed French President Emmanuel Macron and his wife, Brigitte, to the White House for the Trump administration’s first state visit.

In footage captured by MSNBC and later dissected by Twitter users, Trump appeared to make a subtle effort to hold his wife’s hand, first extending his pinky finger and then gently giving her hand a little shake before she finally placed her hand his. People on Twitter took note.

“Unlike the past, when [Melania] had no recourse or influence, she no longer had to accept her powerlessness,” Manigault Newman writes. “I believe that by avoiding Donald’s clasp in public, Melania was grasping the full extent of her power.”

The author continues, “At any time, if [Melania] so desired, she could humiliate [Donald] in public with small, ambiguous gestures, just as he’d openly humiliated her with his affairs and lascivious behavior for years. And there was nothing anyone could do to stop her.”

In response to the publication of Unhinged, President Trump has taken to Twitter in a rage. He recently tweeted that Manigault Newman is a “dog” and has “zero credibility.”

Press secretary Sarah Huckabee Sanders has also issued a statement saying that Newman’s book “is riddled with lies and false accusations,” adding that “it’s sad that a disgruntled former White House employee is trying to profit off these false attacks, and even worse that the media would now give her a platform, after not taking her seriously when she had only positive things to say about the President during her time in the administration.”

And on Tuesday, the president’s campaign announced it has filed for arbitration against Manigault Newman for allegedly breaching a 2016 nondisclosure agreement, according to CNN. (Manigault Newman’s attorney, John Phillips, told PEOPLE in a statement Tuesday: “At this time, we haven’t seen any legal action and don’t have a comment on it.”)

Since Manigault Newman appeared on Trump’s reality show The Apprentice, she has been a loyal supporter. That changed in December 2017, when she was fired from her White House position. Since then, she’s been increasingly critical of Trump. Beyond releasing her book, she claims to have heard a tape in which he uses the “N-word,” and released a recording that allegedly shows that Chief of Staff John Kelly not only fired her, but threatened her while doing so. 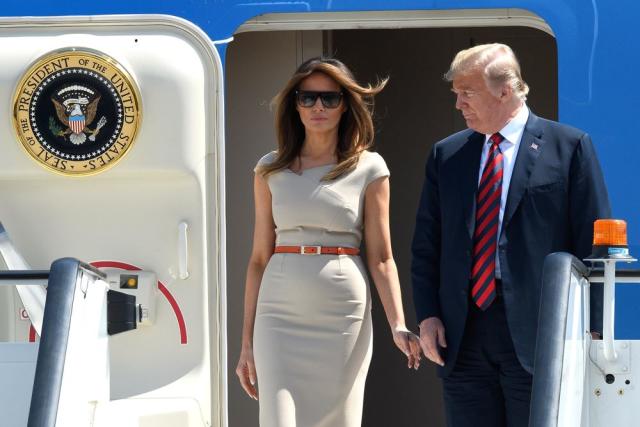 Her book is just as permeated with controversy. Not only does Manigault Newman claim that Trump is a man in “mental decline,” she also suspects he “covets” his daughter, Ivanka Trump, and is verbally abusive to his son, Donald Trump Jr. The allegations of mistreatment extend to wife Melania, and according to Manigault Newman, explain why she’d want to leave her husband

♦ Culled from the People