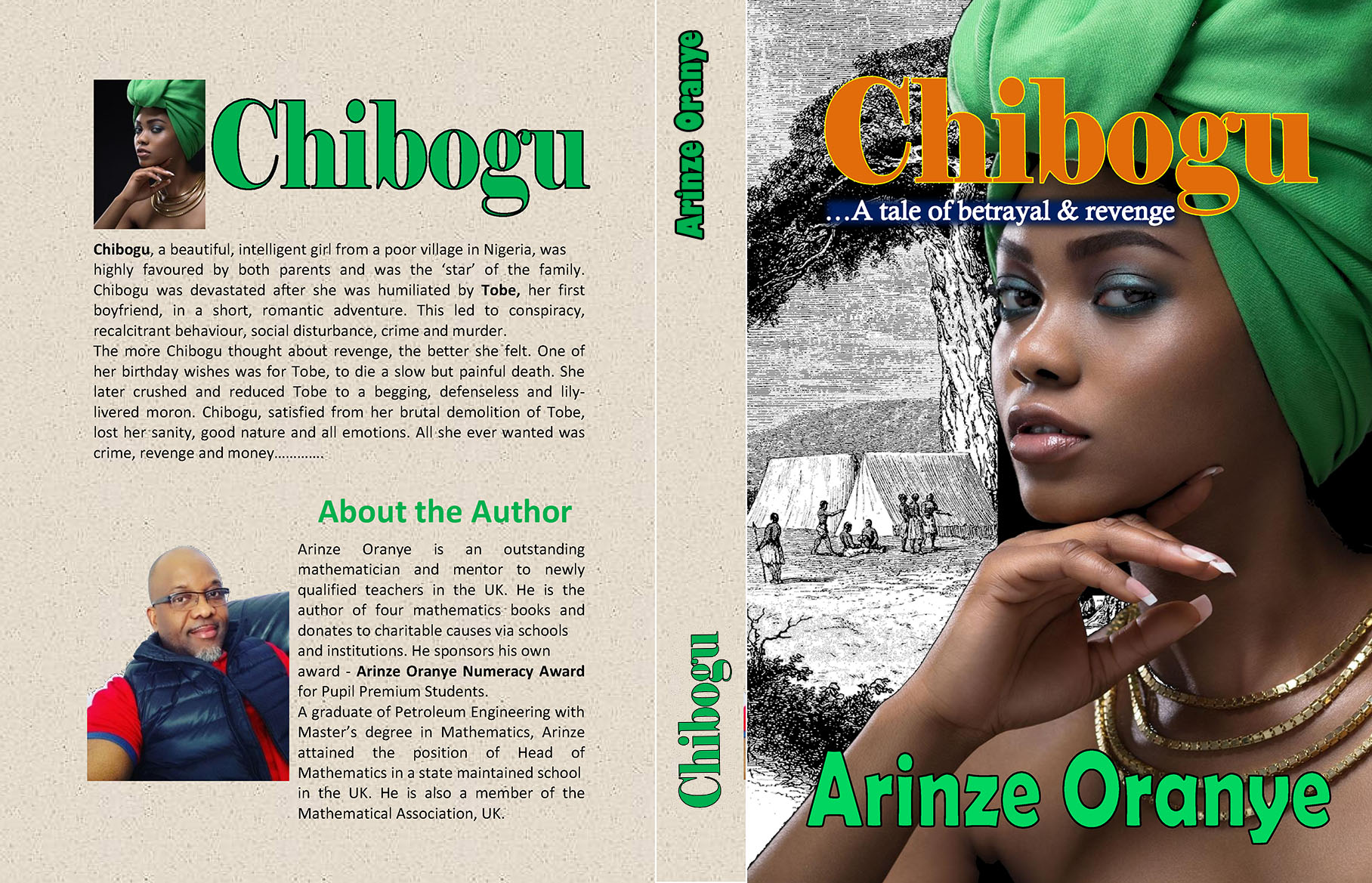 Arinze Oranye, a renowned author of many mathematical books has spent his career making this subject accessible to a broader audience.  But his latest book, very popular in bookstands, emits nothing algebraic, but   reveals an entirely different outlook. Oranye used an attractive and gifted young character, Chibogu to deliver an exquisitely inspiring contemporary romantic novel; combing his storylines   with action-packed suspense to convey a modern-day dialogue, historical settings, mystery, and thrillers.

According to the publication outline, Chibogu, a beautiful, intelligent young girl from a poor village in Nigeria, was highly favored by both parents and was the ‘star’ of the family. Chibogu, was devastated after she was humiliated by Tobe, her supposed boyfriend in a short, romantic adventure. This led to conspiracy, recalcitrant behavior, social disturbance, crime and murder. The more Chibogu thought about revenge, the better she felt. One of her birthday wishes was for Tobe, to die a slow but painful death. She later crushed and reduced Tobe to a begging, defenseless and lily-livered moron. Chibogu, satisfied from her brutal demolition of Tobe, lost her sanity, good nature and all emotions.

Arinze is a UK-based mathematician with over 20 years of teaching experience. A graduate of petroleum engineering with master’s degree in mathematics, Arinze attained the position of Head of Mathematics in a state maintained school in the United Kingdom.

He is the author of Preparation Workbook 1 and Preparation Workbook 2 Mathematics published by Author House, USA in 2013. Other books written by Arinze include are Iconic Maths New GCSE and Algebra Secrets He is the founder and Managing Director at Iconic Concepts Limited, an educational outfit based in the United Kingdom for promoting excellence in primary and secondary education.

Arinze is a philanthropist and an outstanding mathematician and mentor to newly qualified teachers. He donates to charitable causes via schools and institutions in the UK and sponsors his own award – Arinze Oranye Numeracy Award for Pupil Premium Students. He is also a member of the Mathematical Association, UK.

This book is set in a small village in Nigeria, called Ukpor. It has approximately 1 million people with beautiful local scenery, lots of domestic animals and highlands.

Chibogu, a beautiful, intelligent young girl from this deprived village, was highly favoured by both parents and was the ‘star’ of the family.

Her uncle, Mazi Odunze betrayed the trust of the family through greed and avarice. They never recovered from the aftermath of that treachery and perfidy.

Chibogu’s mother, Adaobi, was suspicious of their uncle, Mazi Odunze, when her husband, Okafor died from a hit and run motorist. The twists and turns of events could not determine for sure who was responsible for his death nor the motive until later.

Chibogu, was devastated after she was humiliated by Tobe, her supposed boyfriend in a short, romantic adventure. She couldn’t understand why and that culminated in her involvement in cult and clandestine activities. She was determined to get back at him at all cost, not minding if she would die in the process.

The more Chibogu thought about revenge, the better she felt. One of her birthday wishes was for Tobe, to die a slow but painful death.

She later crushed and reduced Tobe to a begging, defenceless and lily-livered moron.

Chibogu, satisfied from her brutal demolition of Tobe, lost her sanity, good nature and all emotions. All she ever wanted was crime, revenge and money.

Through lies, deception and skulduggery, the investigation prolonged and there were plenty of twists and turns. Seven people were murdered in the process and witnesses systematically eliminated.

Adaobi, Chibogu’s mother, was very smart and had local wisdom packed with subterfuge and chicanery.

She was later arrested for the murder of her husband, Okafor and was jailed but escaped capital punishment due to a favour from the divisional police officer.

Meanwhile, Chibogu tried to dissociate herself from the cult but was threatened with total annihilation of herself and her remaining siblings. When she discovered that it was impossible to leave the cult, she waged war on the cult and was on the run for some time.

The cult members tracked her down in a remote village in the western part of Nigeria, called Ogbomosho. She escaped assassination but was indicted for Tobe’s murder. She was equally jailed and also escaped the death penalty.

Chibogu is available in Amazon and all other book outlets.