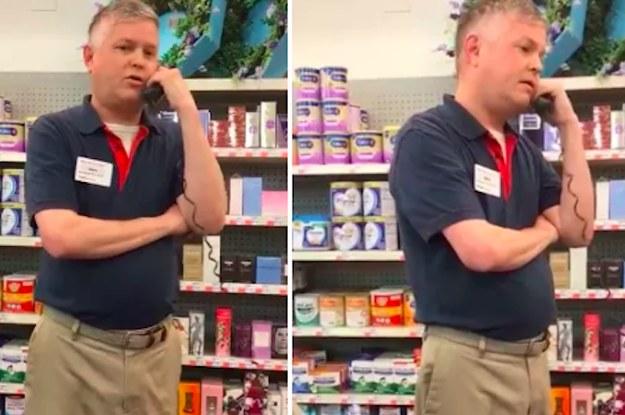 CVS has apologized to a black customer who is claiming a white manager called the police on her after she tried to use a coupon in the store in Chicago.

Camilla Hudson posted a video on Facebook of the CVS employee apparently calling the police, along with a photo of the coupon she said she attempted to use. The man in the footage identifies himself as Morry Matson while on an apparent phone call with authorities.

The police told BuzzFeed News on Sunday that there were two calls made from the store’s address to report an “assault in progress” around 11:55 p.m. local time on Friday. The spokesperson for the Chicago Police Department said that at least two officers responded to the scene and that “nobody generated a report.”

The police spokesperson told BuzzFeed News that she could not provide more information about the incident.

In the video, while seemingly speaking with the police, Matson says that Hudson is “African American.”

The Chicago Sun-Times reported that Matson is running for 48th Ward alderman.

“Taxpayers will notice an increased police presence throughout Alderman Matson’s 48th Ward,” it says on his campaign website.

Hudson spoke with Block Club Chicago about the incident and said that the authorities were contacted after she tried to use a coupon.

Hudson told the outlet she wasn’t having success using her coupon at the self-checkout, and Matson, the store’s manager, began to assist her.

Then he called for another manager, she said. Hudson said that this person, whom she did not identify, told her the store could not take the voucher and suggested she forged it.

“The manager on duty said that he’d never seen a coupon like the one I had and said that he thought it was fraudulent,” she wrote on Facebook.

“When I pulled out my phone to document what happened and exactly what he’d said to me (AND how he’d said it!) he turned his back and walked away from me.”

Hudson told the outlet that she followed the manager who had walked away from her.

Then, she told Block Club Chicago, Matson told her that she “better leave because [he] called the police.”

She said that she remained calm and did not use curse words in her reaction with the employees.

“I was not yelling, I did not raise my voice, I did not use profanity, I did not call anyone outside of their name — other than not accepting, basically, ‘Screw you,’ that was my offense, if you will,” she told Block Club Chicago.

Hudson said that Matson told her that he called the police. And Hudson said she captured a second call to authorities on video, which she shared on Facebook.

In a statement provided to BuzzFeed News on Sunday, CVS apologized to Hudson. “We sincerely apologize to Ms. Hudson for her experience in one of our stores,” the company said.

The statement said that the company is “actively investigating” the incident.

“The employees who were involved in the incident will not be working in the store pending the findings of our investigation,” CVS said in the statement.

CVS also said that it has strict rules against discrimination.

“We have firm non-discrimination policies in place to help ensure that all customers are treated with respect and dignity,” the company said. “Profiling or any other type of discriminatory behavior is strictly prohibited.”