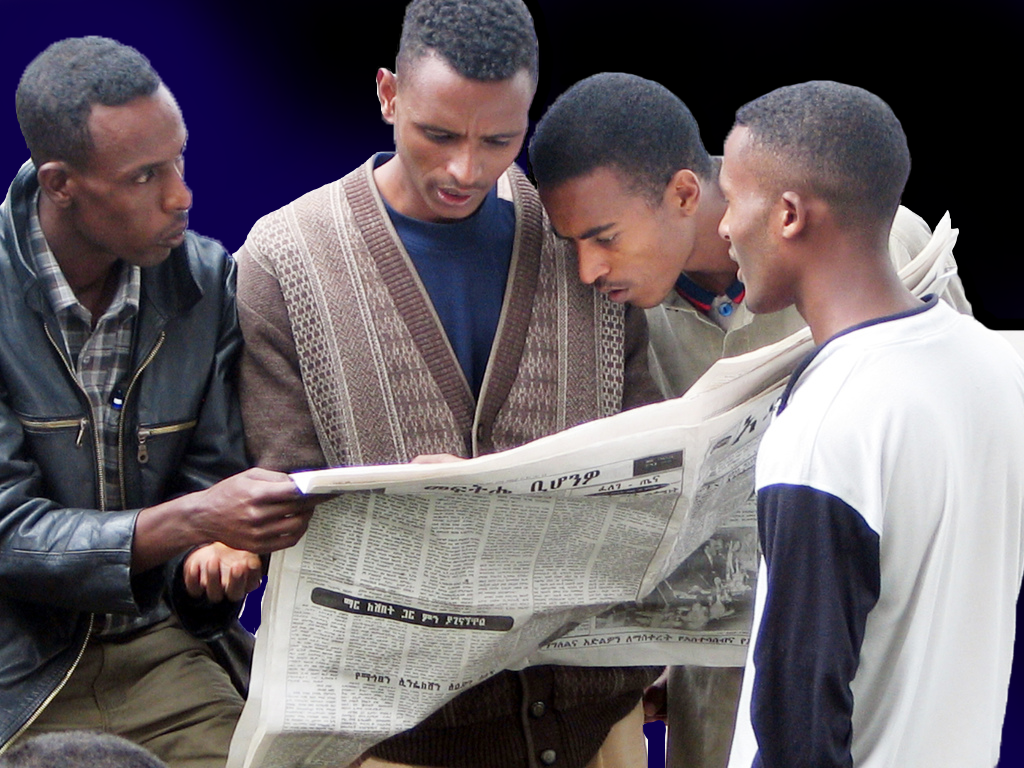 This is Who We Are

THE INTERNATIONAL GUARDIAN The paper hit the street May 1, 1998, with a circulation of 100,000. With unique news presentation strategies, International Guardian, published by Texas International Guardian Incorporated is produced to meet the highest achievable technical standards. Being the first black publication to really reach out to both African- American and African communities, now the most read black/minority paper within the academic community, metamorphosed into an ideal news and advertising medium for diverse-business interests including individuals, groups, and public entities. This of course makes the paper the official news source for Africans and African-Americans in the greater Houston metropolitan area.

In the late 90s, when more minorities are occupying the commanding heights in the nation’s economy and politics, International Guardian remained a veritable guide to understanding the successes and setbacks of every socio-political dispensation. In doing this, the paper strongly defended honest leaders, and projected their notions with all fairness to readers. Besides, International Guardian is equally committed to covering the emerging global political and economic influence of Africa with major emphasis on crude oil and energy.

As you well know, many African owned businesses are thriving in Houston and elsewhere in America, just as many new discoveries of gold, crude oil and other vital minerals have been recorded in many parts of the African continent. International Guardian has a unique agenda in reporting news from Africa: educating readers on the increasing American presence in African economy. It has always unraveled the myths and realities of US-African relations. Coming at s time most African countries are returning to the path of a democratic system of governance,

International Guardian, has assigned itself the critical task of chronicling and interpreting, from a black world perspective, those major events of the new millennium. This is our candid mission, and consistency in execution is not negotiable. 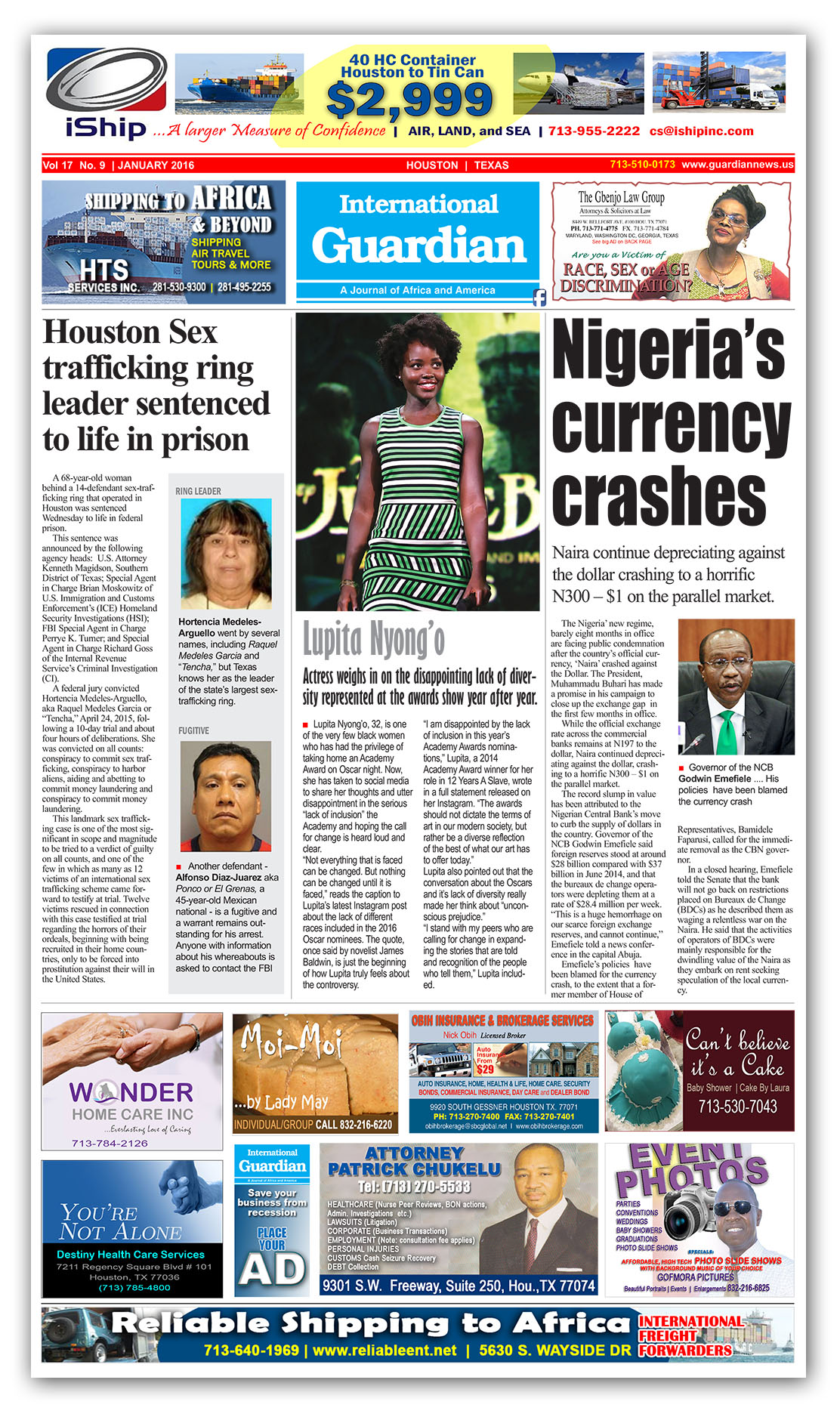 Our MISSION is to ensure that every publication meets the highest editorial and technical standards. Every written piece must replicate objectivity, fairness and accountability as our goal, but promotes private enterprise, support responsible governance and advocate social justice. This mission is our covenant with all readers, and consistency in execution is not negotiable.

“In giving rights to others which belong to them, we give rights to ourselves and to our country,” ( John Fitzgerald Kennedy).

Civil Rights are not just a nonrepresentational philosophy. They provide ethical and legitimate avenues for human existence, devoid of discrimination or persecution. International Guardian has defended these values in no small measures, working to ensure that RESIDENTS, especially the IMMIGRANT community exercise their opportunity to fully participate in the society—live as full-fleshed citizens, without fear of discrimination. We have demonstrated this by:

■ Championing several cases of civil rights violation against individuals scorned and violated by the system.

■ Collaboration with community leaders to identifying and exposing social-political system lapses such as violation of voting rights; Discrimination based on sexual orientation and gender identity; Child trafficking, child slavery and labor; Racial, ethnic, and religious profiling; and inequities in criminal justice system. Nevertheless, it is our belief that every citizen has a part to play in not only promoting equality, but discourage any entity, or attitude that endorse discrimination. Consequently, we denounce tribalism, and work vigorously toward unity, peace, and progress in every AFRICAN country faced with such travesty.

“The liberties of our country, the freedom of our civil Constitution, are worth defending at all hazards; and it is our duty to defend them against all attacks. We have received them as a fair inheritance from our worthy ancestors,” (Samuel Adams “Father of the American Revolution). In the United States where International Guardian is based, civil liberties are civil rights guaranteed to citizens of the United States under the Constitution of the United States, as interpreted and clarified by its Supreme Court.

■ International Guardian believes without compromise, the rights or freedoms given to the people by the First Amendment to the Constitution, by common law, or legislation, allowing the individual to be free to speak, think, assemble, organize, worship, or petition without government (or even private) interference or restraints.

■ Freedom of speech, as protected by the First Amendment, allows people the freedom to express themselves and enjoy the expressions of others in nearly all instances. International Guardian stands by definition of civil liberties as individual legal and constitutional protections against the government.

■ Equal protection as it prevents the government from creating laws that are discriminatory in application or effect.

International Guardian uses it editorial power to promote community business to ensure consumers are treated fairly. Unscrupulous profit-seeking merchants who prey on community members are often exposed. It is our responsibility as a community oriented media entity to alert citizens about Consumer protection laws designed to ensure fair trade competition and the free flow of truthful information in the marketplace.

These laws are designed to prevent businesses that engage in fraud or specified unfair practices from gaining an advantage over competitors and may provide additional protection for the weak and those unable to take care of themselves.