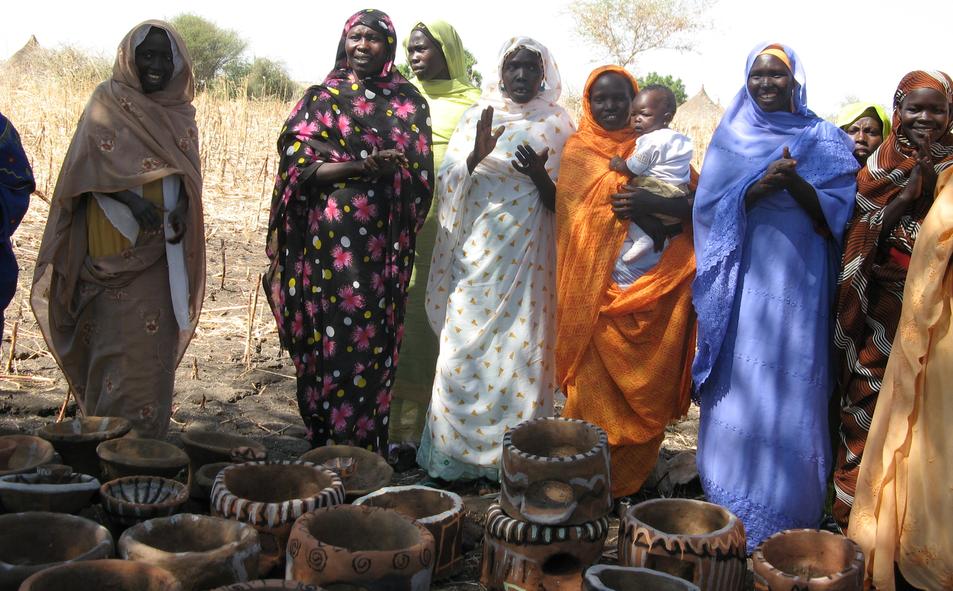 At a Presentation event held in Ondo State of Nigeria to benefit rural women with 60 sets of 8HP Milling Machine, Otunba Dr Basirat Nahibi  (OON), founder and president of the Women Advancement for Economic and Leadership Empowerment in Africa (WAELE/ARCELFA) reinstated a mission to stand as a stronger voice toward meeting the aspirations of the African Women regarding economic empowerment and social freedom. This was in October, 2005.

In her words, Dr. Nahibi  said, “We believe that by partnering with this administration, we can reduce if not eradicate poverty totally in our dear country. You can always count on our support whenever you need us while we expect same from you to sustain the growth of this young organization.” This basically explains the core objectives of WAELE/ARCELFA as an entity, and it social responsibility to the women gender.

WAELE/ARCELFA was founded on   May 8 2004 to meet the sociopolitical needs of women in African and inspire them to participate in the economic decision-making; peace and conflict resolution; and affairs of governance in the continent. Today the group has spread through 42 African Countries, assisting African rural women to organizing themselves for improved livelihoods through targeted events and programs.

On another significant note, according to the UN Women, African continent has demonstrated a commitment to promote gender equality and the empowerment of women. For instance, almost all countries have ratified the Convention on the Elimination of All Forms of Discrimination against Women; more than half have ratified the African Union’s Protocol on the Rights of Women in Africa.  These values accord with the mission of the Women Advancement for Economic and leadership Empowerment (WAELE/ARCELFA) in unifying various women groups and providing a stronger voice toward meeting the needs and prospects of the African Women.

International Guardian sat one-one-one with Dr. Nahibi and discussed her leadership of an entity that has made several impacts in the state of the African women. She is a known figure in the Nigeria’s political arena, who in 1978 joined the then People’s Redemption Party (PRP) in the country’s quest for a second republic. She was a member of the Social Democratic Party (SDP) and also a founding member of both the All Progressives Party (APP) and  Congress for Progressive Change (CPC). Her partisan involvement in the current Peoples Democratic Party (PDP) and All Progressive Congress (APC) substantiates her status as a godmother in the country’s political confraternity.Yet, Dr. Nahibi mentioned nothing about politics, but consistently stressed the urgent need to address regional issues about gender inequality, hunger, and uncertainties that permeate various region in the continent. She is currently a member of the African Union (AU) Committee of 30 for African Women Fund, and spoke heavily about WAELE/ARCELFA’s effort to attain peace and stability; and recognition and acceptance of women in the leadership process in the continent. “It has been a long journey, I tell you. I recall on the 11th September 2006 when WAELE/ARCELFA visited His Excellency Mr. Jakaya Mrisho Kikwete, President of the United Republic of Tanzania in Dar-Es-Salaam to commend him on the appointment of 16 female Ministers and other women in top decision making positions – we sat down with him and discussed the problems affecting African women and the way forward. The meeting was successful,” she said.

In furtherance of their mission to advocate a peaceful region, WAELE/ARCELFA collaborated with the Sudanese General Women Union (SGWU) to hold a peace meeting in Khartoum on Darfur issues in October 2008. The group visited President Omer Al-Basher to discuss the Darfur issue as well as issues concerning Sudan and the Republic of Chad. As a result of this meeting, the Sudanese border with Chad and Sudanese Embassy in Ndjamena were re-opened. “Special credit was given to WAELE/ARCELFA peace mission to Khartoum when this border was re – opened by the Sudanese Government, and these are just a few out of the numerous regional engagement we have facilitated to attain a peaceful region,” Dr. Nahibi said.

Dr. Nahibi continued on Sudan, “My group visited the Internally Displaced Person’s camp (IDP) in Al – Fashir, Northern Darfur in May 2009 and organized peace meeting with the Dafurian women in collaboration with Sudanese General Women Union (SGWU). More than 3,000 women participated in the peace meeting. Also we visited South Sudan in October 2010, met with the First Lady H.E. Mrs. Kiir and discussed the need for peace in both North & South Sudan after a prevalent referendum. That was not all – WAELE/ARCELFA also visited South Sudan in Feb 2014 on a peace mission and delivered relief materials to the IDP.”

Other rewarding peace missions by WAELE/ARCELFA include; a visited to the women of Tindouf, Algeria in Dec 2010; a special mission to Saharawi refugee camp in December, 2010, and another visit to  Juba, South Sudan from in February 2014 for a PEACE operation.

In accordance with its mission, how has WAELE/ARCELFA lived up to its expectation in unifying various women groups and providing a stronger voice towards meeting the aspirations African Women? Dr. Nahibi said that her organization has conducted a number of conferences and seminars to enhance gender sensitivity of various governments in Africa and to empower women to assert their God-given rights to aspire to positions of leadership in government, private sector, and the civil society.

She said, “We held our first continental conference in Bamako, Mali, in March 2004, and 14 African countries participated. The second WAELE/ARCELFA continental conference themed “African women in a contemporary world:  issues on political and economic development” was held at the ECOWAS Secretariat, Abuja in July 2005. During this event, representatives from 18 African countries attended. If I may recall, Hon. Mrs. Gertrude Mongella, former President of Pan African Parliament led the Tanzanian delegation and delivered the keynote address. Also, in October 2006, our continental conference took place in Abuja, Nigerian at the International Conference Centre. Senator Joy Emodi gave the keynote address,” themed, “Politics and nation building: the role of Nigerian women.”

In addition to the conferences, the organization’s humanitarian projects across various regions have been successful in providing underprivileged women with basic necessities.  For instance, during the ethnic religious crises between the Christians and Muslims in Plateau State of Nigeria, WAELE/ARCELFA donated tons household items;  including blankets, mats, buckets, bowls, and foodstuffs to the victims. In 2008, the group visited the Chadian refugees during civil strife and handed out to hundreds of victims; bags of rice, maize, and millet, and salt, cartons of spaghetti, detergents, and plastic cups. Other relief items included; 5,000 slippers, 5,000 buckets, 2,000 mats, 2,000 blankets & and 200 boxes of milk. In 2014, the group also visited Juba, South Sudan where hundreds of underprivileged victims of the system were presented with similar relief materials.

The progress made so far by WAELE/ARCELFA in the sub-Saharan African regions on women affairs has been enormous. Dr. Nahibi admitted that the current situation regarding gender equality and the empowerment of women in Africa needed more work, but touted her group’s unwavering mission in bridging the equality gap and reducing economic inadequacies. “We have tried in many areas on gender equality and empowerments though advocacy and conferences.  However, we still have a lot of work to do regarding the 35% affirmative action which is still unachievable in many of the countries including Nigeria.  This year, we are also focusing on gender violence and women rights,” she noted.

At the moment, WAELE/ARCELFA’s economic empowerment has visibly empowered thousands of women in sub-Saharan African regions. In Nigeria alone, noted Dr. Nahibi, “More than 10,000 women in Akwa Ibom, Borno, Ondo & Abia States of have been successfully rewarded with economic empowerment equipment to boost productions in their individual trades and disciplines.  Indeed, those that are into cassava processing could only produce two bags of cassava manually with hard labor in a week, but after giving them the equipment, they can now produce more than 20 bags daily. Similarly, the women that are into palm oil processing could only produce 20 liters in a week. It is my pleasure to bring to your knowledge that with the assistance of WAELE/ARCELFA, they can now produce 400 liters in a day.”

Dr. Nahibi is also involved with the African Union’s Economic, Social and Cultural Council (ECOSOCC), coordinating the West Africa headquarter of the Women and Gender Cluster. She is also a member of African Union (AU) Steering Committee for the Fund for African Women. African union ECOSSOC promotes dialogue between all segments of Africa people on issues concerning the continent and its future. The committee also creates strong partnership avenues between governments and all segments of civil societies, especially; women, the youth, children and the Diaspora, organized labor, private sectors, and professional groups

According to Dr. Nahibi, “as a team, we have been able to propagate the participation of Africa civil societies in the implementation of the policies and the program of the African Union – the most crucial aspect being the support of policies and programs that promote peace, securities, and stabilities; and foster continental developments & integration.”

“It is my hope that international organizations and other humanitarian entities in Africa and around the globe collaborate with us and support us as we promote and defend not just the culture of gender equality but also the culture of good governance, and democratic principles, human rights, and social justice. I would also call on the media – both local and international to support our effort in promoting and strengthening the institutional, human and operational capacities of the African civil society,” Dr. Nahibi concluded.